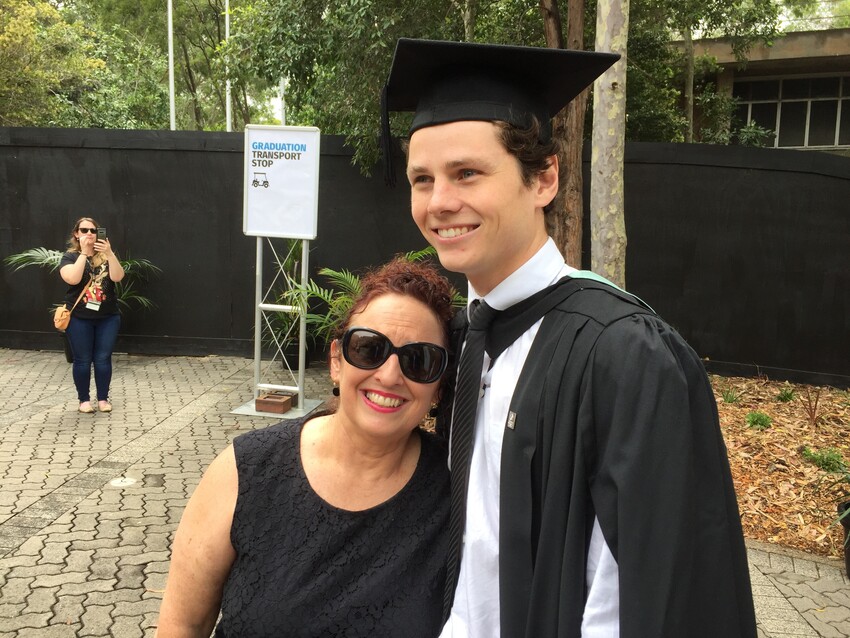 Back in 2017, Hamish Thomson, a talented AFL player from Hunter Sports High School, was one of the first three Big Picture students to go to university on the strengths of their Graduation Portfolios.

Having explored sport science and sport administration in his Year 9 and 10 projects, Hamish always thought that he’d become a professional sportsperson. Instead, his focus became firmly fixed on the law.

Now, in 2021, he is soon to graduate from a double Business/Law degree after five solid years of study.

‘I graduated from Business in 2019, and now I’m in my last semester of Law, with two subjects to go. I’m hoping to be graduated by November, and admitted to the Supreme Court as a practising solicitor when admissions take place in March of next year.’

And his prospects for employment are looking excellent. Hamish has managed to complement his studies with employment in legal firms of different sizes and specialties including family law, probate, conveyancing and has now found his passion for insurance law.

‘It’s weird how it all works out. I love doing that kind of work. It’s like a hybrid between criminal and commercial law, really interesting.’

In late 2019, Hamish was selected by the University of Newcastle Law School to attend a New-Colombo cultural immersion in China, giving presentations about Newcastle and the Australian legal system to Chinese law students and legal firms around the country.

It was December, and in case you haven’t already wondered, yes they travelled through Wuhan by train ‘… and they were all talking about this virus, I bet it’s nothing, just a bit of swine flu.’  Fortunately, they all arrived home safely and no one tested positive for the Coronavirus.

Now that Hamish is nearing the achievement of a significant goal in his life, at the grand old age of 22, he is finding a little time to look up from his books and to reflect on his journey.

‘I’m quite happy at the moment. That’s all I want to be in life, and I’ve been happy throughout my degrees, I haven’t once thought of changing or switching.’

However, it was not like this for everybody. In his first semester of Law, Hamish noticed that there was a dropout rate of around 40%. Though they had got the marks for law, even some friends from other schools dropped out, because they hadn’t truly understood what was entailed.

Having done an internship in a local law firm, completed several large projects about the Australian Legal System, and being mentored by a Professor of Law at the University of Newcastle, all while still at school, Hamish felt certain of his interest.  His best advice for other young people hoping to gain entry to university, is to first be truly certain of your passion, as opposed to chasing a prestigious career path.

We asked him what the journey through tertiary education has been like, and whether he felt adequately prepared by his time in Big Picture.

‘Referencing is a massive thing at university! It didn’t kill me, but I was warned about that by a law lecturer.’

Hamish advises that there are short courses available at the university to help bring students up to speed in a variety of skillsets including referencing, writing, coding etc and that they are a great resource. He suggests that such courses could suit interested Year 11 students, if Big Picture campuses were able to negotiate for this to occur with partner universities.

He also said that he has needed to learn to write much more concisely, and hone his ability to paraphrase and explain complex information.

While Hamish skipped Year 12 and went straight to university, he felt mature enough to cope with all of the study requirements. While it was tough adapting to exams, he felt that the intense preparation required by exhibitions in his Big Picture years had put him in good stead.

‘It’s a similar pressure concept, just a different style, presenting orally rather than in writing. You’ve got to really know all your work and either explain it to a group of people, or to a pen and paper.’

In fact, Hamish says that doing exhibitions was significant in his being able to think on his feet as a law practitioner, and now believes that had he been prodded and peppered with more questions throughout his exhibitions his mental and speaking agility would have been even further developed!

He also pointed out that at university there is no friendly Big Picture advisor to remind you to get your work in on time or to study for exams. So, not wanting to pay more HECS if you fail a subject becomes a motivating factor. Fortunately for Hamish he has not had to face such a situation.

Where to next? For Hamish, there is ‘always something else on the horizon to do. I just want to keep on getting the most out of life.’ He is thinking about progressing his education further, and down the track working in a different field, ancillary to the legal profession, in order to broaden his knowledge.

He also hopes to be able to pass on advice to other prospective law students in Big Picture schools, including how to get their hands on the 300 page, AGLC Guide – the legal referencing bible!

Big Picture wishes Hamish all the best in his last semester at university.