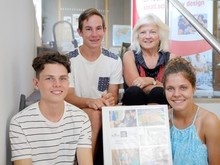 BPEA is proud to announce the appointment of CEO Viv White to the Order of Australia for her services to education and to the reengagement of young people in learning for life. As CEO of Big Picture Education Australia, Viv’s inexhaustible energy, combined with her formidable networking, has seen the Big Picture design for schools and learning create breakthrough opportunities for thousands of young people around Australia.

By 2005 Viv had concluded that the best way to achieve long term change in catering for disengaged young people was to redesign schools around principles that worked - and to use the subsequent success to drive improvement in other schools. Together with John Hogan and others, she then established the not-for-profit organization Big Picture Education Australia.

The growth of Big Picture in Australia since 2009 has been dramatic – all the more so because growing a design of whole school change is extremely challenging. It has required extraordinary leadership.

Viv White has provided that leadership. Her vision - to see students achieve success against the odds, in schools designed to make it happen – has become a reality. Her current work shows no sign of slowing and is focused on ensuring the Big Picture design continues to influence the direction of school change.

Viv is quick to attribute her success to her partnership with others and the contributions they have made.

At the same time, the people in Big Picture can readily point to Viv’s many qualities which explain her achievements:

Those of us in Big Picture have been thrilled to share the increasing profile and success of the Big Picture learning design. Viv’s award is icing on our collective cake.

Foundation Program - ACT
September 14th, 2020
This course is an immersive five day program. Learn how to redesign your (more...)